This is What Creative Inspiration Really Looks Like – Skinny Artist 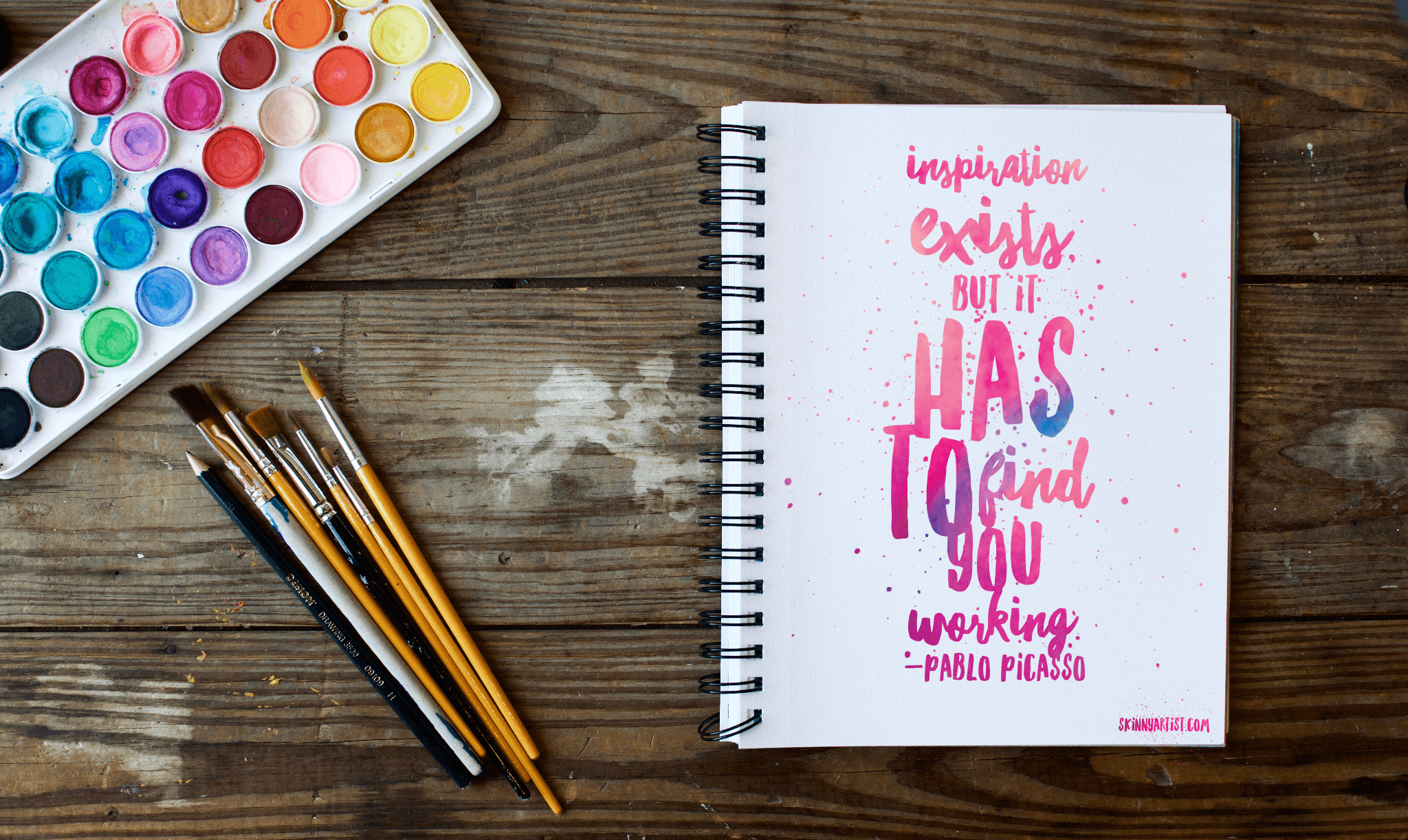 There’s a myth out there that stops a lot of people from creating things: the tortured genius, working feverishly in his squalid apartment while the muse whispers in his ear, which she does because he’s special…

Jack Kerouac, the story goes, banged out his great American novel, On The Road, on a single giant scroll over three sweaty weeks at his typewriter. He supposedly refused to revise the thing, telling his editor angels had dictated it.

That’s not how it really went, of course. As Howard Cunnell points out in his introduction to On the Road: The Original Scroll, the book actually took three years to finish, and they weren’t easy years, either.

The story of the novel’s completion, he writes, “is about work, ambition, and rejection, but it is also about transformation. These are the years in which Kerouac transforms himself from a promising young novelist into the most successfully experimental writer of his generation.”

Here’s the cool part: Kerouac underwent that transformation because he followed a series of steps anyone, with enough commitment, can follow.

We might not end up influencing generations of other artists like he did, but following those steps will lead to our best work, the work that’ll make us feel whole and fulfilled, and that’ll leave its own mark on the world.

In 1926, Graham Wallas published The Art of Thought. The book outlines 4 main stages to the creative process: Preparation, Incubation, Illumination, and Verification.

Preparation involves forming a question about our project and immersing ourselves in the search for answers. We decide we want to create something and set out to learn how. It doesn’t just involve pre-work for the project itself; it encompasses everything we’ve ever done or felt.

When we set out to create something specific, we should immerse ourselves for awhile in our subject. A novelist might head to the library. A painter might sketch and browse images on the Internet.

Even before that, though, Csikszentmihalyi argues we should learn the traditions of our art.

Kerouac’s preparation involved reading the work of authors like Dostoevsky and Miguel de Cervantes. It also involved a lot of planning, dreaming, traveling, meeting people, and journalling late into the night.

Kerouac’s Incubation included sometimes putting On the Road aside to work on a different book, The Town and the City. It also included periods of not writing at all.

This is the part everyone thinks happens automatically, and pretty much never does. Occasionally, after some Incubation (which could be weeks, months, or the amount of time it takes to have a shower), our muse will deliver a nice little package for us.

More often, we have to go banging on her door, and when she doesn’t answer, yell, “Hellooo, is it ready yet?!!” after which point she might open the door and toss it to us.

Or, she might let us wait on the stoop.

Either way, it’s worth going after her, because otherwise, Incubation can take years, and who has that kind of time?

Messing around and experimenting with your art is the equivalent of banging on the muse’s door. I generally find the best thing to do after Incubation is to sit down and scribble for a while, jotting down whatever comes to mind.

At some point, maybe right away, sometimes half an hour in, the tentacle of an idea usually starts tickling my brain, and if I grab and pull it, it’ll often lead to something bigger than I expected.

If I’m lucky, it pulls me into what Csikszentmihalyi calls “flow: an almost automatic, effortless, yet highly focused state of consciousness.”

The feeling that precedes it–what I call “tickling”– is what Wallas calls “Intimation”. Sometimes, it’s just a vague sense of having something to say, although we might not know immediately what. Other times, if it expresses internal conflict, it causes deep emotional discomfort.

Intimation is what Kerouac must’ve felt when he wrote in his journal that he was sure his novel was “about to move.”

Whatever form Intimation takes, yielding to it brings “Illumination,” in which the idea bursts forth. “Yielding” is key here, because our Inner Critic will always try to make us shut the door on the light that wants to come.

What I love most about Kerouac’s process is how he summons the final burst of inspiration that led to the myth of the scroll (which he did write in three weeks — after three years of building up to it).

First, he hits a wall. In his journal, he writes, “I’m stuck with On the Road. For the first time in years, I DON’T KNOW WHAT TO DO. I SIMPLY DO NOT HAVE A SINGLE REAL IDEA WHAT TO DO.”

Later, he writes, “hell with it; don’t worry, simply do.” He struggles for awhile longer, but he works at being “submissive to everything, open, listening.” Such openness and submissiveness ultimately enable the three-week writing marathon in which he produces some of the most beautiful writing in American literature.

On rare, wonderful occasions, we can evaluate the first version of a piece and discover it’s exactly as it should be. There’s nothing we could do to improve it.

More often, though, verification is the part where we discover our ideas still need work. If we’re not careful to be very gentle with ourselves at this stage, it can feel like the creative equivalent of waking up hungover next to the person we brought home from the bar, who, in the cold morning, looks more like a melted candle than the thing we took to bed.

Which is to say Verification isn’t always fun — although it can be, especially if we have enthusiastic, compassionate people to help us.

It’s the part where we take stock and gather feedback, acknowledging our first go-round usually won’t yield a finished product.

Kerouac wrote several versions of On the Road. He tried telling the story through the eyes of a jailbird, a French Canadian, and a 15-year-old, before finally settling on himself as the narrator. He wrote and re-wrote the book over and over again. Each time, he looked at what he’d done and decided it still wasn’t right, until finally, he wrote the story on the scroll.

In his journal, he writes, “Turn your thinking into your work, your thoughts a book, in sieges.”

Elaboration is where we renew our commitment and run through steps 1-4 again and again until we end up with something we can love.

Although I’ve written the process as if it always goes in order, Csikszentmihalyi reminds us “that the five stages, in reality, are not exclusive but typically overlap and recur several times before the process is completed.”

Elaboration is the repetition, the hard work, the dogged plodding, the showing up whether our muse is there or not. Csikszentmihalyi quotes the sculptor Nina Holton:

“Tell anybody you’re a sculptor and they’ll say, ‘Oh, how exciting, how wonderful.’ And I tend to say, ‘What’s so wonderful?’ I mean, it’s like being a mason, or being a carpenter, half the time. But they don’t wish to hear that because they really only imagine the first part, the exciting part. But, as Khrushchev once said, that doesn’t fry pancakes, you see. That germ of an idea does not make a sculpture which stands up. It just sits there. So the next stage, of course, is the hard work.”

Amanda Truscott studied English Literature and Journalism, after which she had writer’s block for most of a decade. She spent several years researching the creative process. Now, she happily writes novels, short stories, and she never worries she’ll run out of ideas. Her first nonfiction book, Creative Unblocking: Bypass Self-Doubt, Tap Your Genius and Complete Your Best Work is now available.